Majins are one of the fourteen playable races in Dragon Ball Online Generations.

Majins have varying skin color and tentacles acting as their "hair". They either have eyes with black sclera or white sclera. They also have holes that go on either side of their head, acting as their "ears".

Majins can either be male or female.

Majins are great at Ki Damage. They also have a fair amount of Health and Agility. However, they lack Ki Control, making their ki attack combos short-lived. They also lack Physical Damage, making them mediocre at hand-to-hand combat.

Majins can unlock Super Regeneration at level 50. This technique can be triggered by holding down G, and then pressing whatever button the player assigned this technique to.

Upon triggering this ability, the player will become stationary as a hot pink aura coats around them for ~4 seconds. After that, the player will regain 50% Health and 25% Ki and Stamina. Afterwards, the player will have to wait 3 minutes (180 seconds) until they can perform this technique again.

This technique can be interrupted, however, as the ~4 seconds of being stationary leaves the player completely vulnerable. Therefore, if the opponent is quick enough and deals some damage to the player, the player won't retrieve any Health, Ki, or Stamina, and they will be forced to wait another 3 minutes to activate the technique.

Absorption (吸収, Kyūshū) can be unlocked at level 100. This technique can be triggered by holding down G, and then pressing whatever button the player assigned this technique to. 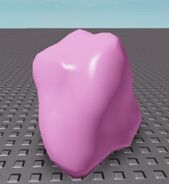 The fluid where victims are trapped in

Community content is available under CC-BY-SA unless otherwise noted.